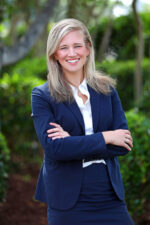 A graduate of the Honors College at the University of South Carolina, Spring Valley High School, and the Charleston School of Law, Cassity Brewer is a former NCAA cross country and track and field athlete, Palmetto Fellows scholarship recipient, and Southeastern Conference Honors scholar who began her legal career first as a law clerk for the City of Charleston’s legal department and then for the United States Attorney’s Office for the District of South Carolina.

Post- law school and upon immediately passing the South Carolina bar exam, she became an Assistant Solicitor for the Sixth Judicial Circuit, first specializing in all domestic violence crimes in Lancaster, Chester, and Fairfield, S.C. Ms. Brewer took countless cases to trial in this position and went on to prosecute a multitude of violent crimes and Class A felonies, including attempted murder and kidnapping cases. Ms. Brewer was also the DUI prosecutor for the Sixth Circuit and prosecuted all DUIs for Lancaster, Fairfield, and Chester, including felony DUIs resulting in death.

After spending several years as a prosecutor, she decided she wanted to defend people’s rights and fight for justice in South Carolina courts. She became a public defender and continued to gain experience in criminal law while representing persons charged with all levels of criminal offenses. After some time in private practice handling a wide variety of criminal offenses and traffic tickets, she founded her own firm in the hopes of defending and fighting for all people’s rights as aggressively and as creatively as possible.